We live in a world in which content is continuously thrown at everyone. Whether you like it or not, advertisers and marketers are constantly informing you of the “next best thing”, or something that companies think you should know about or purchase. We see and hear messages everywhere: on billboards while driving to work, while working out to your favorite Pandora playlist, and while scrolling through Facebook to see what your friends posted following a crazy weekend. Even social networks like Instagram, which originally only provided people with pictures from those whom he or she followed, now “sponsors” content from marketers who are trying to express a message through a picture or video.

Even though countless messages are being sent out each day, only a select few grab the attention of the targeted audiences. For example, I normally tend to scroll through Twitter on a daily basis. While I follow many accounts ranging from fashion stores to technology sources to the news, I normally scroll past the typical marketing tweet with a link attached to it without even knowing what I am doing. Unless the message is very clever, emotional, or has a very appealing picture attached to it (aka food, puppies, etc.) I normally do not even notice it.

Emotion is the key to my heart… and attention

For me, the messages that get my attention most often are the ones that provide an emotional element. When I see or hear the message, I feel something (normally sadness, fear, happiness, or hunger), and then I am actually persuaded to either research more into the advertisement, or do what it is striving to get me to do. A marketing campaign that grabs my attention and holds it ceaselessly throughout the entire showing is the “It Can Wait” commercial. The campaign, which is powered by AT&T, showcases how easily something can go wrong while texting and driving. To sum it up, a mother is driving with her young daughter, when she checks her phone to view a response that she received on a picture that she had previously posted. While distracted, she collides with another car, which results in a tragic accident. The commercial ends with quick cuts of different lines saying “No ______ is worth a life”, and fills in the blank with “search,” “post,” “glance,” “email,” and “text.”

While the commercial that airs on TV is only about 30 seconds, AT&T released a longer, four-minute YouTube video that often surfaces on Facebook. The campaign also has a Twitter account, which retweets many messages about the cause.

There are so many reasons why this campaign is a genius way to grab the attention of a large audience.

Family means more than any text or post so I don't check my phone while driving!! #ItCanWait #icwendorsed #tbt pic.twitter.com/xmLHSuUIri

Grab my attention by promoting what I actually want to see!

Have you ever looked up a pair of shoes, and then later that day on Facebook noticed an advertisement for the same brand of shoes? No, it’s not coincidence or fate, it’s a tracking code. This is a borderline creepy but brilliant form of marketing and advertising that easily grabs my attention. Basically, marketers and advertisers use data collection to find out what us consumers are viewing on the Internet, and then promote their products as advertisements on websites that we visit later. As an example, this morning I was shopping online for a poster for my bedroom. Hours later, while scrolling through Facebook, I came across an advertisement for posters. Obviously, this marketing tool was going to grab my attention, because I spent time earlier in the day looking for the exact thing that it was promoting. 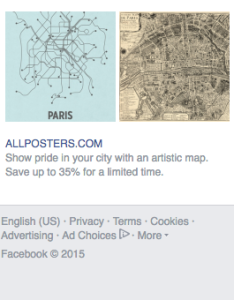 And this doesn’t just happen with Facebook. Often times, I can be scrolling through a website that I randomly stumbled upon, and I will notice an advertisement for something that I had researched in the past. More often than not, this redirects me back to the website of the product, and I spend time researching about what the product and its company have to offer.

These days it seems almost impossible to get a message across, which can be discouraging to marketers, advertisers, and public relations professionals. No, I’m not saying that I would rather live in the early 1900’s, when most people received messages through the single newspaper that they were reading, or radio station that they were listening to. However, I know that as a future communications professional, I will need to know how to strategically communicate, so that my message does not get lost or ignored due to the incessant clutter. If every form of marketing and advertisement could be sent out through an emotional campaign or form of data tracking, that would be marvelous. Life would be so easy, for both myself as a consumer and as a communications professional. I would never have to sort through all of the clutter to get the message that I wanted to receive, and would know exactly how to grab the attention of my target audience (except I think that in the end my short attention span would even skip over those forms of marketing if there were too many). So for now, I will continue to applaud those marketers and advertisers who somehow grab my attention in a world of excess clutter and overloading messages.

View all posts by laurenbailey3443